So I was perusing Facebook the other day, as you do, and unsurprisingly I get lots in my feed about dogs – in fact, the truth is my feed is all about dogs and little else!  It’s not such a bad thing really…….

There are some excellent groups and pages doing amazing work in support of dogs, but occasionally even those with the best intentions can be doing a little harm without realising.  I see loads of posts about dogs needing new homes and it really does make my heart melt.  Moreover, when I see just how much interest there is in them, my faith in humanity is upheld – there are so many people who genuinely want to make life better for these lovely and sometimes troubled dogs.

One post in particular caught my attention about a week or two ago.  A lovely dog was being advertised for rehoming and there was lots of interest, which is great.  As I started to read though I was very disappointed to see that the dog was described as “dominant” and when I enquired a little further I found that this was a professional assessment from a behaviourist.  The term dominant doesn’t provide any prospective owner with any clear or accurate information about the dog or their behaviour, but what it can do is make you think that the dog will require some sort of rank reducing treatment otherwise he will try and take over the household.  Think for a moment what that label means to you – I am sure it will invoke all manner of thoughts!

Dominance in its true sense is a repertoire of behaviours used to control resources such as sexual mates, locations, food or the movement of others within social groups – subtle communication tends to work to maintain control of resources without the need for physical force which remains relatively rare.  Furthermore in many social groupings, the individual already in control of a possession is often able to main control of it, again by the use of subtle warnings which suggests that dominant behaviour is often fluid and context specific.  This is true of many multi-dog households where the control of items will change regularly.  In my house for example, whichever dog gets onto the couch first can normally keep hold of their place with a subtle lip curl towards the other.

The concept of dominance is very misunderstood and regularly misused by those who haven’t studied or observed animals living in groups.  Today it still tends to conjure thoughts about being a “pack leader” and encourages us to “dominate” our dogs before they dominate us – this is where the problems occur as owners can become extremely competitive with their dogs and misinterpret enthusiasm, lack of impulse control, lack of training or other behaviours as a direct challenge to their authority and position in the pack.  Sadly the term “Alpha” is still prevalent in many dog training circles and much of the nonsense you read on the internet supports the need for owners to be a strict “pack leader”.  The belief that we as humans should control every aspect of our dog’s life can be very detrimental to developing a confident and loving companion – having some choice and control over their environment is what builds confidence in animals.

This dog in question being advertised for rehoming may have had some behavioural issues or may have just lacked training – but none of that deserves the label of dominance and the potential pack leader treatment that those types of labels can cause.  Dominance is a behaviour, not a personality trait!  It is important that all of us who work professionally with dogs understand that labels are problematic, especially those that should only be used to describe behaviour.  Just because a dog exhibits aggressive behaviour in certain situations or contexts doesn’t mean that the dog should be labelled aggressive – if that was the case then most dogs and humans would be called aggressive.

Dr Susan Friedman of https://behaviourworks.org, a world-renowned behaviourist regularly explains the importance of unlabelling individuals and why those labels bear no relevance when trying to train or change behaviour. 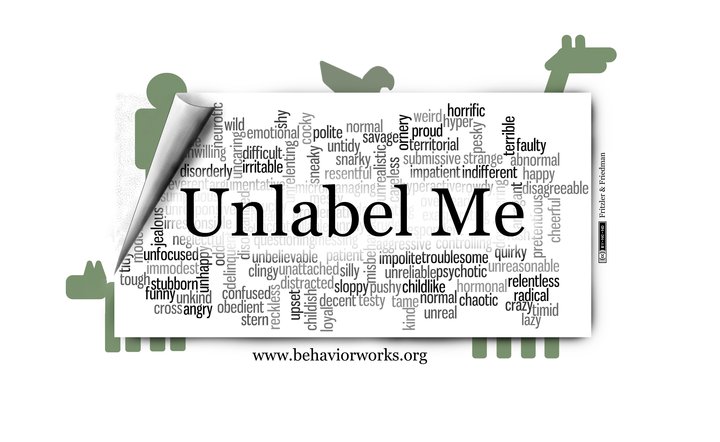 Dogs are just trying to get on in a human environment, they are not trying to take over your home – teach and reinforce appropriate behaviour, help them to view the world as a safe place and you won’t go far wrong!  If you are having difficulties or you have been told that your dog is dominant – please get in touch!

2 thoughts on “Dominance – stop with the labels and give the dogs a chance!”

We exist to empower both ends of the lead so check out our behaviour and training advice.  Building relationships and improving lives.